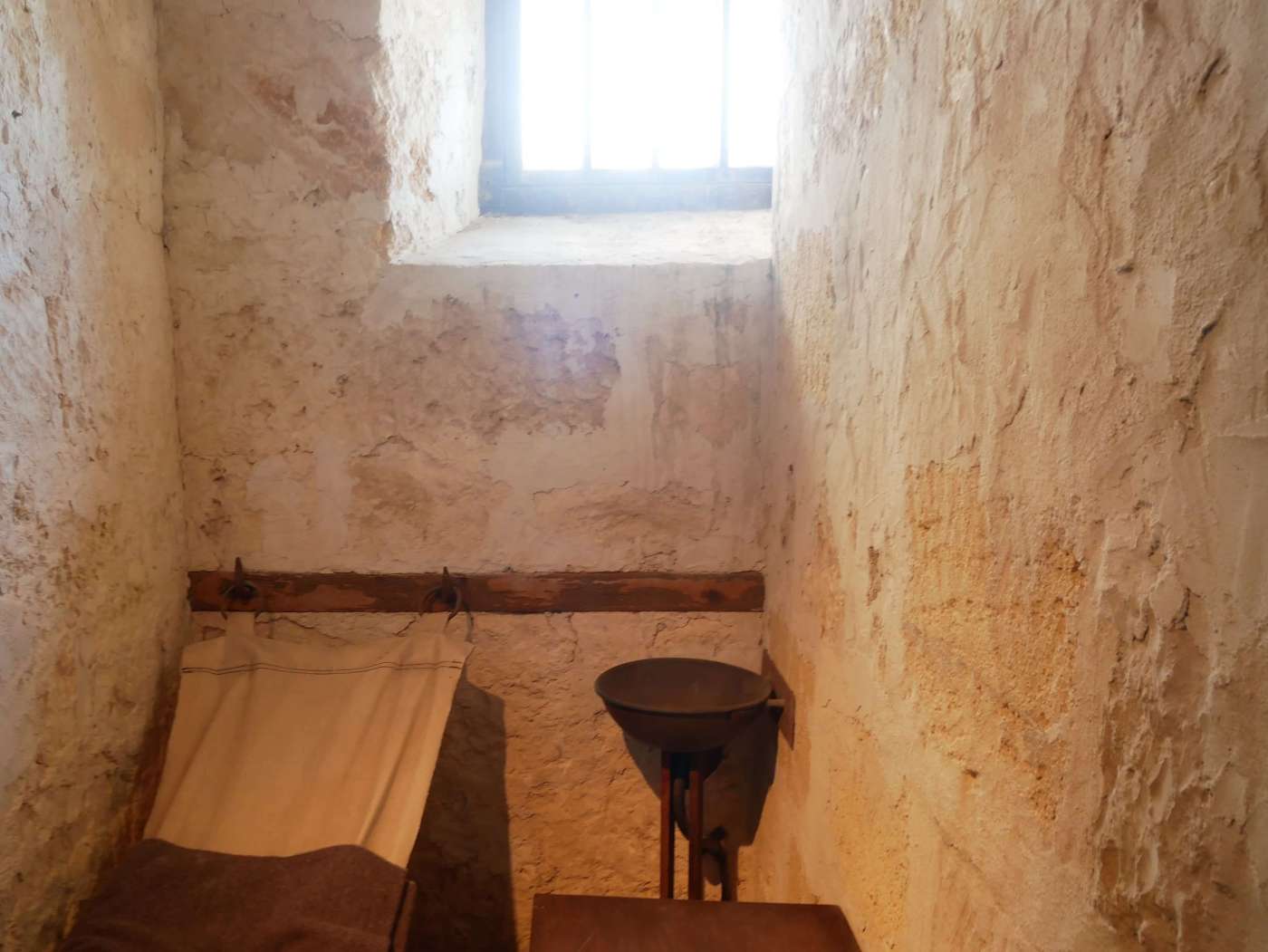 After “sivun” weeks in New Zealand, we’ve landed in Western Australia for the next leg of our family gap-year.

We are technically heading towards winter, but it doesn’t feel that way. The trees are green, rather than the reds and oranges that had started to appear in New Zealand. We’ve also gone up a few notches on the temperature gauge compared to our last few weeks in a campervan, and it’s a pleasant warming sun rather than scorching hot.

Sprinklers on suburban lawns came as something of a surprise to the kids. They couldn’t work out why the grass was wet if it hadn’t been raining. Parrots were a pleasing sight too, congregating on tin roofs in our suburban road, before screeching off in a blur of colours.

The only hint that winter may be around the corner is the presence of people wearing a lot more clothes than us, plus a few slightly odd looks in our direction while sun bathing. It is slightly disconcerting to see people walking past in puffer jackets and bobble hats, while we’re applying sun screen.

Apart from the unsurprisingly nice weather, my initial impression of Perth was that it seems huge. We haven’t seen so many people in one place since we left London. Most of New Zealand could move in and you’d hardly notice.

The central business district looks sleek and shiny, with money from vast mining operations helping to pay for towering offices of glass and steel. Daily commuters are transported from the sprawling Perth suburbs by a spiral of rail tracks emerging from Perth Central, and they’re wearing sunglasses rather than carrying umbrellas. 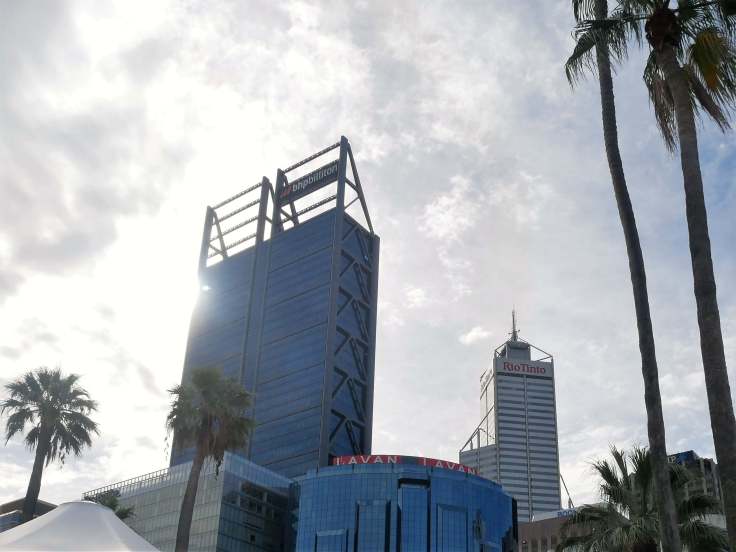 A sprinkling of red brick Victorian buildings look a little lost in the centre of town, but it’s nice to see that some heritage has been preserved amidst the rush to build skyward. The redevelopment of Elizabeth Quay is also providing a better link from downtown to the Swan River, and the kids were more than happy to explore the new playground at Elizabeth Quay Island.

Fresh off the plane, we drove to Yanchep National Park to spot some kangaroos, as if to prove to ourselves that we really were in Australia. 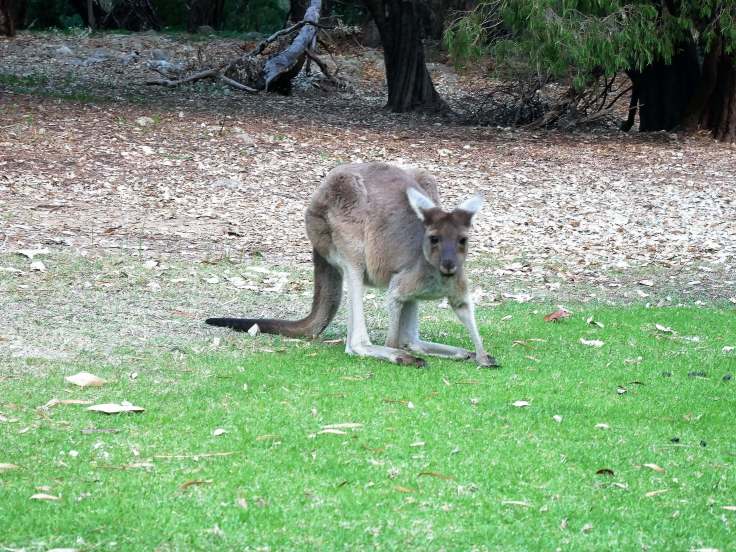 The kangaroos were happily grazing in an open patch of grass, visible before we’d even managed to get out of our car. They appeared entirely oblivious to our presence, at least up until the point when Lexi started doing her kangaroo impersonation.

We were pleased to see some genuine Aussie wildlife and I was pleased that my research had paid off. For a $12 entry fee and a one-hour drive to Yanchep we felt like true bushmen.

After a few days in Perth, it soon became apparent that kangaroos were around every corner. By early evening, hordes of bouncy marsupials would emerge on practically every available patch of grass. We’ve sadly got to the stage where we’re not even looking for them anymore, they’re just there, where we’d usually expect to see some cows or sheep.

That first sighting at Yanchep was still special though, even if we didn’t really need to make a special visit to see them. The best thing for me was simply the look on the kids’ faces as the kangaroos started hopping towards them.

We were staying in an Airbnb apartment this week, in Subiaco, within easy walking distance of Kings Park. In case you’re wondering, I think it’s pronounced “sue-be-ako”, but it took me nearly all week to work this out.

Kings Park is one-thousand acres of greenery, bang in the middle of Perth. The largest inner city park in the World. Three kids’ play areas. A café. Parrots flying around where there ought to have been pigeons. Probably some snakes in the undergrowth too, but we didn’t see any despite walking around all walk with a big stick.

Kiera has watched too many episodes of Bear Grylls, including 3 new episodes on the plane over. So our approach to all potentially hazardous situations is guided by what Bear would do. In the case of potential snakes, therefore, we go armed with a stick and a couple of small rocks. This is to allow us to stun the animal, before chopping of its head and grilling it for dinner. Thinking it through, we don’t normally carry a machete around with us, so we’d have to remove the head with a sharpened rock. We never got close to seeing any snakes, but better to be safe than sorry.

Kings Park was too large to explore in one day, or even one week, but our daily visits inevitably centered around one or other of the playgrounds. These have been thoughtfully crafted from natural materials found within the park, which I’m sure the kids appreciated.

Perth is blessed with miles of stunning coastline and even the winter weather was proving nice enough for us to warrant some beach time.

We were guided towards Hillarys Harbour as a safe place for the kids to go swimming. The harbour was indeed perfect for a family day out. There was a playground on the beach, the water was shallow and sheltered, and there was a generally pleasing buzz of seaside activities.

The water looked lovely and we splashed around in the shallows on quite a few occasions. We would have gone further except I kept seeing jellyfish. They were absolutely tiny and nearly entirely see through. They looked very harmless, but my knowledge of jellyfish varieties is non-existent, so I had visions of ruining our trip with a deadly sting.

We’re still taking baby steps getting to grips with being in a country where there are animals that are trying to hurt you. 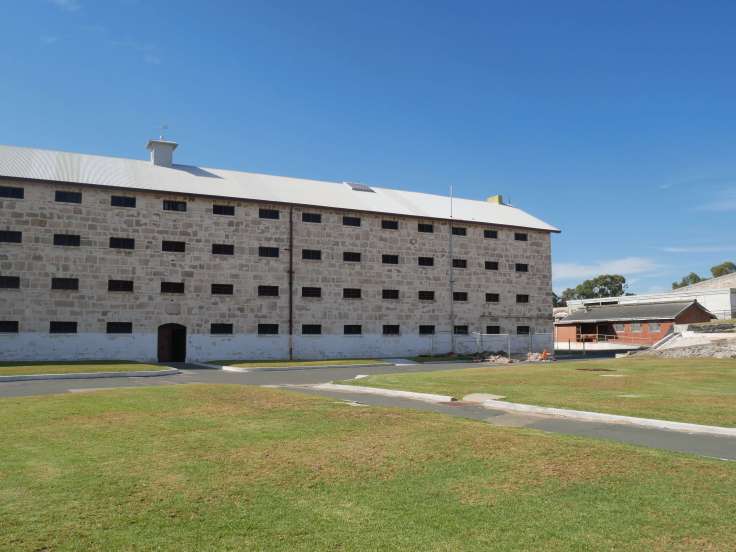 The last hanging took place in 1964, but the doors only closed on Freemantle Prison in 1991, after 136 years of housing criminals. (Took me a little while to work that out on my fingers, after a few months away from my day job, so hope you found it useful).

John Keating arrived in Freemantle on 20th August 1853. Sentenced in Limerick to 15 years for stealing a cow. In 1853 there was no prison yet in Freemantle. The convicts first job was to build their new home, on a hill overlooking the harbour.

The first section of cell block was opened in 1855, allowing prisoners to be transferred from their temporary warehouse accommodation, and then fully opened in 1859.

Convict transportation from the UK continued until 1868, with around 9,500 men deported in total, which happened to include five members of the Keating family according to Freemantle prison records, mostly from Ireland.

We arrived in Freemantle under slightly more favourable conditions. The Qantas flight from Christchurch was very civilised and we were not sleeping in a warehouse. We chose to visit the prison to get a sense of what life would have been like for some of the earliest travelers to this shore.

As you’d probably have guessed, it wasn’t pretty. The original cells were barely big enough to swing a hammock, measuring just 7 feet by 4 feet. The men were effectively stacked in concrete cages, four stories high. 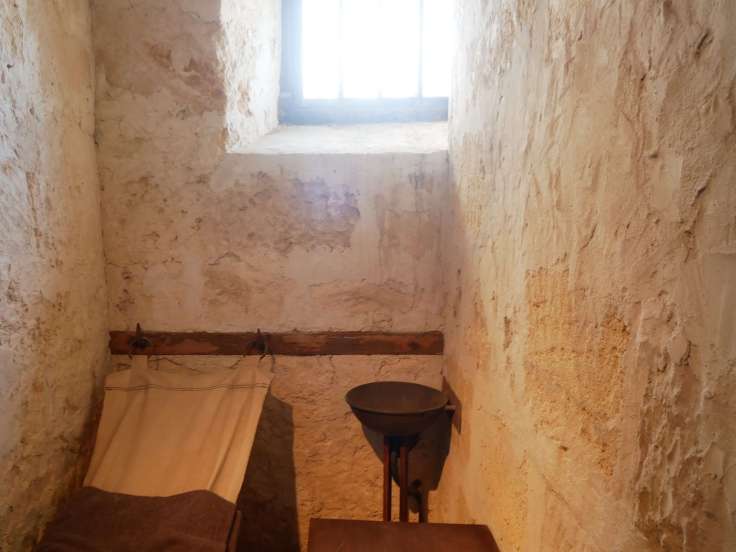 Inmates were let out, but only so that their labour could be used to help with public infrastructure works. This practice continued until 1911, and was the reason that the original settlers in Western Australia had lobbied the UK Government to send convicts.

The regime was harsh and discipline was brutal. Solitary confinement was used for periods of up to 90 days, with inmates locked in cells with no light and walls thick enough to stop sound.

Freemantle Prison is now a world heritage site and a potential wedding venue, should you be so inclined to tie the know in the prison chapel. I was glad to escape after an hour. The kids were keen to embark on another tour, recounting escape stories, but we promised to come back another day. 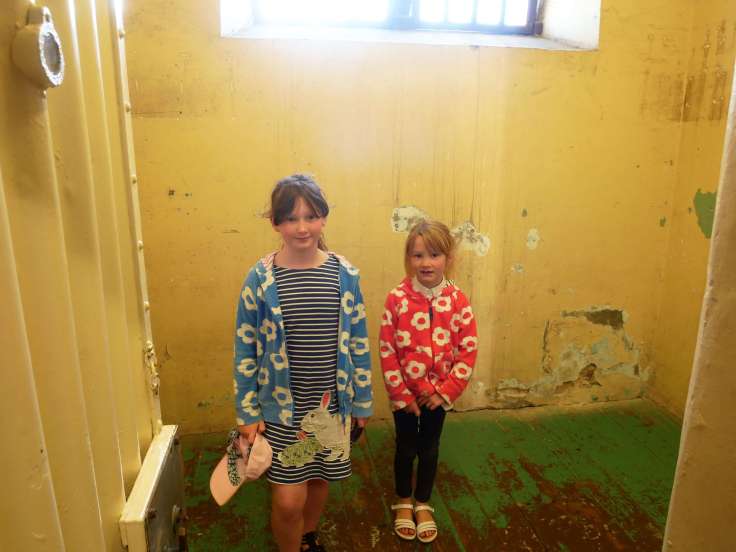 After a week of city life, it’s time to get back to the country. We’re planning a mini road trip to the bottom edge of Western Australia, starting with a few days in Albany. This is “mini” by Australian road trip standards because Albany is only 280 miles from Perth, so it’s practically the next town over.