Not long after dropping back our RV in Cairns, we were enjoying a pizza at a lovely Italian restaurant in Trinity Beach, our new home for the week.

Trinity Beach was a good location for a family break, within 15 minutes drive of Cairns and on the road up to Port Douglas.

Snorkeling On The Great Barrier Reef

We planned on doing not much this week. Except of course we couldn’t come this far and not go out to the barrier reef.

On the drive up to Cairns, we passed roadside signs with trivia questions. I believe these were designed to combat driver fatigue. This is how I learned that the Great Barrier Reef is the largest living thing on earth, at least according to whoever installs signs for the Queensland roads department. I trust them.

A friend had recommended going on a tour with Quicksilver, from Port Douglas, which included a boat ride to the outer reef plus the option of doing some snorkeling.

The boat trip from Port Douglas took 90 minutes. At the outer reef we were landed onto a fixed pontoon large enough for several hundred people, marooned out at sea for at least the next few hours until our boat ride back.

Both kids are now stronger swimmers than me, plus I don’t like putting my face into water. Something about not wanting to drown. So, I opted to see the reef via an underwater semi-sub.

I was expecting to see a glorious display of colour on the reef, but most of the coral was grey, with just the odd patch of brilliant blue. There appeared to be a healthy population of fish living on the reef, and I was lucky enough to spot a few green sea turtles grazing on the seabed.

As I wouldn’t get my face wet, Anja got the honour of taking the kids snorkelling. First they had to change into some very fetching, full body lycra suits.

Kiera is a very confident swimmer, but there were some big fish in the water and we were miles out to sea, so it took a little time to get enough confidence to enjoy the experience. Needless to say, after several hours in the water she didn’t want to get out. 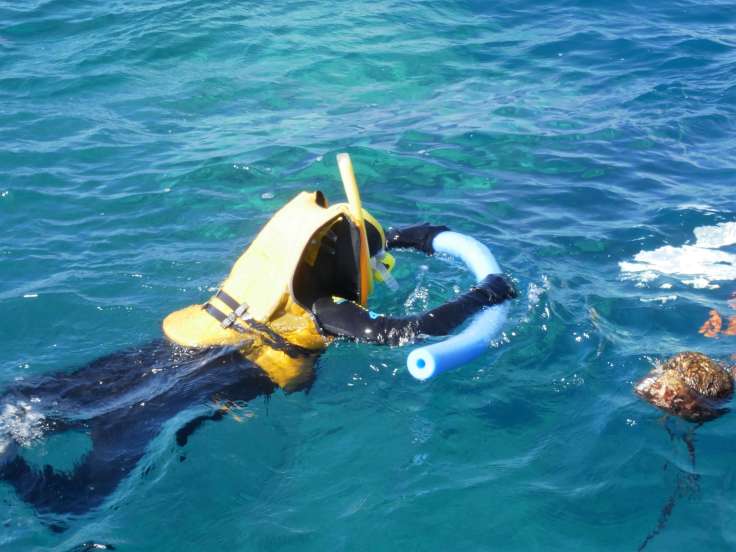 Lexi was braver than me and at least got in the water, but she wasn’t quite ready to go out swimming with the fish. 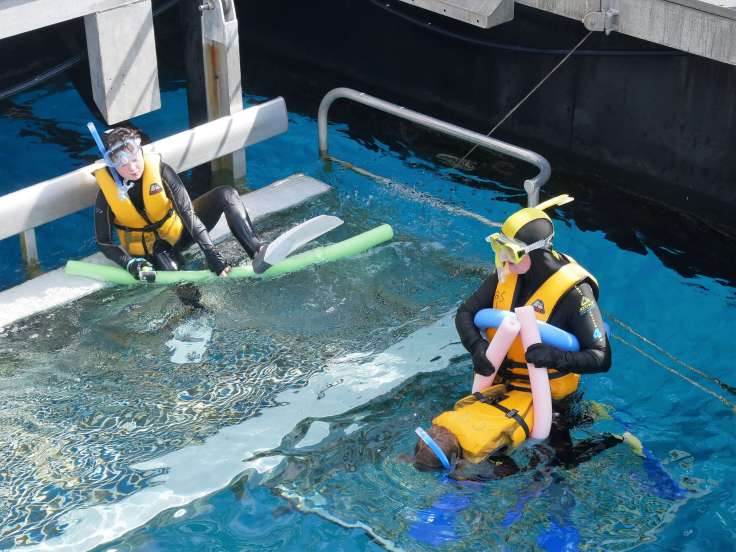 I’m not a marine biologist, but I understand that rising sea temperatures are bleaching the coral, which is why the reef had lost its colour and didn’t look particularly healthy. Perhaps the presence of several hundred tourists each day, arriving for lunch and swimming in the sea, also isn’t conducive to a naturally pristine environment.

After a few hours on the pontoon, we were whisked back to dry land, ready for a beer and some food along the Port Douglas waterfront.

Despite our visit to Australia Zoo the previous week, we decided to visit some more crocodiles while we were in their natural habitat. Hartley’s place is an interesting combination of zoo and farm, with live crocodiles mixing with crocodile sausages.

None of us really fancied sampling the sausages. The real highlight was going out into a crocodile infested lake on a tiny boat, where another crazy aussie dangled raw chicken off a makeshift fishing pole made from bamboo. 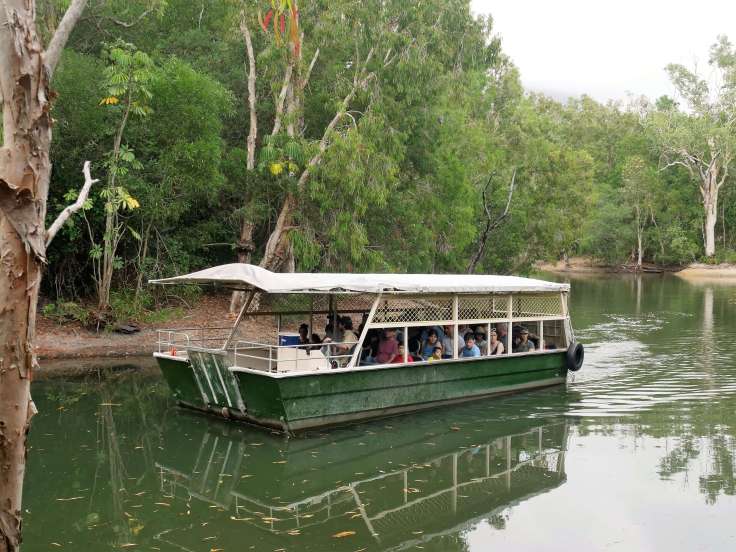 We were told that this method of feeding helps to keep the crocodiles active, but it seemed designed to antagonise the poor creatures. Either way, it worked wonderfully. The boat was nearly swallowed whole during the ensuing feeding frenzy and we all took one step back as the largest crocodile attempted to join us in the boat.

We were still acclimatising to life in the tropics, so most days for us needed to include an element of cooling off in water.

Given the combination of crocodiles and jellyfish, plus the lack of a natural beach in Cairns, the best and most definitely safest spot to cool off is along the Cairns esplanade. There is a man-made pool, constructed on the sea front, using filtered sea water. There is even a small artificial beach for sand castles.

After enjoying some wonderful natural sights in Queensland, the kids felt that we hadn’t seen enough colourful plastic, so we also headed for a day of water sliding at Sugarworld. It was the school holidays, but the place was nearly deserted. This was perfect for our two. No queuing.

Pokies are an Australian phenomenon, with signs for the addictive gambling machines lining most high streets. They hadn’t featured highly on our family itinerary, but we’d lined up a visit to a sports bar to watch the British & Irish Lions take on the All Blacks, so I had to check them out at least once.

Trinity Beach sports bar had all bases covered. There was a family restaurant and bar, a sports bar and a pokies room. I learned that pokies are basically the same as slot machines, so I can’t quite understand why they’re such a big deal over here. You might as well take all of the money in your wallet and set it on fire.

After some negotiation with the Australian sports obsessed Australian bar staff, we managed to secure one television screen in the family bar to watch the Lions. A small group of fellow fans and a couple of kiwis gathered around us. There was no sound, we were just on pictures, but that was good enough to see the Lions triumph and tie the series at one game apiece.

We have a few days in Sydney to wrap up our Australian adventure, before a week in the sun on Oahu island, Hawaii.

3 thoughts on “What Is The Largest Living Thing On Earth?”