I’m not sure why you’d want your dinner to be chucked through the air, but a large crowd was baying for more fish flinging. We’d arrived at Pike’s Place Market and stumbled upon the fish counter. Huge specimens of fresh fish were in the process of being hurled, from the front of stage fish monger, to some brave men working behind the counter, who were being required to receive the weighty and very slippery-looking catch. 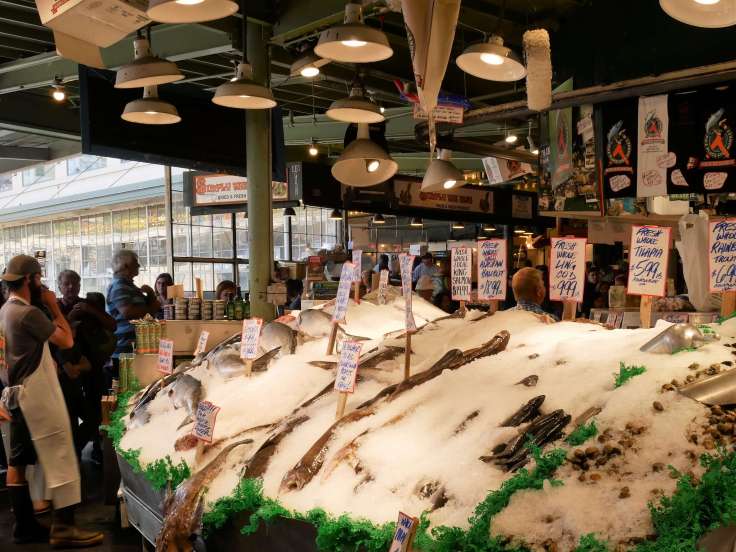 Pike’s Place is the home of Starbucks, but we didn’t feel the need to pay homage to a chain of coffee shops, so instead we stayed and watched the fish throwing. We had to battle to get out of the crowd once our time was up, and the rest of Pike’s Place was seething with people browsing stalls of fruit, vegetables, flowers and assorted homemade objects.

The view from the back of the market was worth the trip alone, with distant snow topped mountains framing a glorious view of Puget Sound.

We’d stopped for breakfast in the welcoming sounding Crumpet Shop. The crumpets were homemade and extremely tasty, but there was an almost overwhelming array of potential toppings to navigate. The kids played it safe with raspberry jam. I couldn’t decide and was feeling adventurous, so I opted for a savoury option of green tomatoes, with a helping of maple butter for pudding. This was more food than I needed for breakfast, but I felt like throwing caution to the wind. 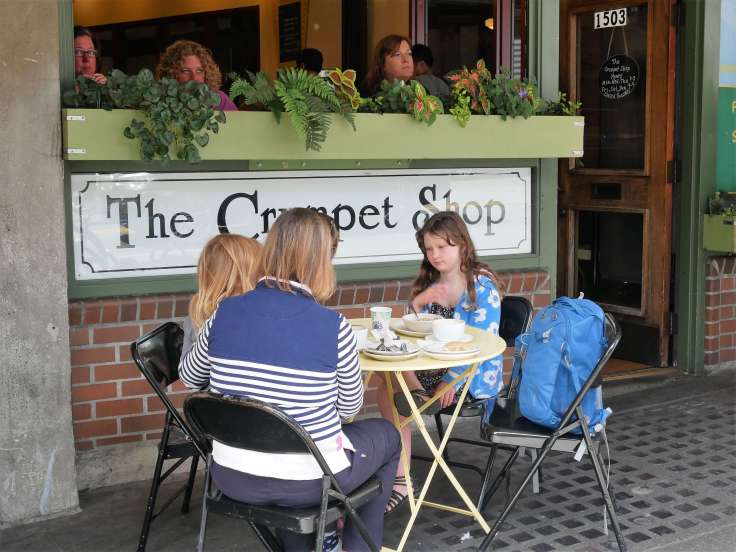 Fully sustained for the day ahead, we spent the morning exploring the stalls of Pike Place and then headed out to Space Needle. We got way laid for several hours in the Children’s Museum, which was stacked full of opportunities for the kids to explore and pretend play.

The Chihuly glass exhibition was incredible to look at, but the edge was taken off it by worrying about whether the kids were about to touch / break one of the very expensive looking sculptures. 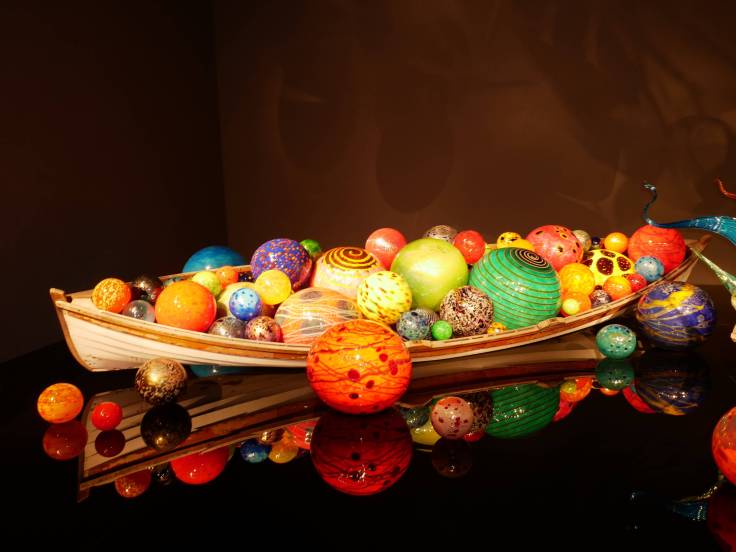 With the crumpets walked off, we headed for the best pizza in town at Serious Pie. One of the major benefits of having children is that we don’t usually need to reserve a table for dinner. Eating bang on 5pm every day tends to ensure that we beat dinner rush hour.

Serious Pie was seemingly so popular, however, that a queue was forming as they were opening up. We were seated at a shared table, which caused an initial flurry of confused looks. Any apprehension that we might need to speak with strangers over dinner was soon overcome. Surely one of the best things about coming to America is how friendly everybody seems, and we were soon swapping holiday stories and life plans with a totally unknown family from California that just happened to be sharing our dinner table.

We went back to Serious Pie for dinner on our second day in Seattle and sat next to the same family again. I don’t think they were stalking us, but the pizza was very good and our second night felt like a family reunion.

Our brief stay in Seattle coincided with some beautiful summer weather, and on the basis of our experience, Seattle looked like a great place to live. The downtown area was vibrant, with buildings that were old enough to provide some character. The football and baseball stadiums were walkable from downtown, which is surely how it should be.

One thought on “Summer in Seattle”